Computer science and development evolved in parallel in England, USA and USSR. There are several cities that took major role in the first Soviet computer era: Kiev and Kharkiv in Ukraine, Minsk in Belarus, Moscow, Penza and Kazan in Russia. Due the World War II all vital factories and universities were moved from the west (Kiev, Minsk, Saint-Petersburg, Moscow) to the east, including Kazan city. Therefore, Kazan became one of the major technical and scientific centre in the Soviet Union, and the city was chosen for building the first serial computers in USSR.

In 1953 the Communist Party approved a request to build a computer factory in Kazan to produce electronic devices for the military agency. The factory was ready for large manufacturing in 1959 and the government asked to build two M-20 computers.  The architect was S.A. Lebedev, who already had experience in designing and building computers in Kiev and Moscow, however, they were mere specimens and the newborn task aimed to build the series of computers.

M-20 is the first serial computer in USSR. It was built from vacuum tubes (valves) and the first two machines occupied the whole level of the factory. The vacuum tubes require colossal energy and emit a lot of heat. You can find the parts of this excellent machine only in the Kazan computer museum, which is based and supported by Margarita Badrutdinova.  She has been working with computers in the factory from its first days. 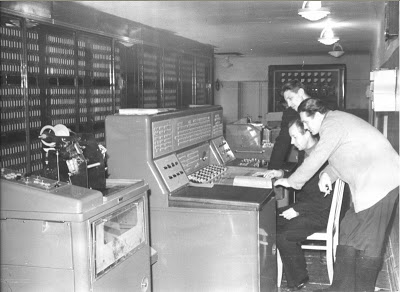 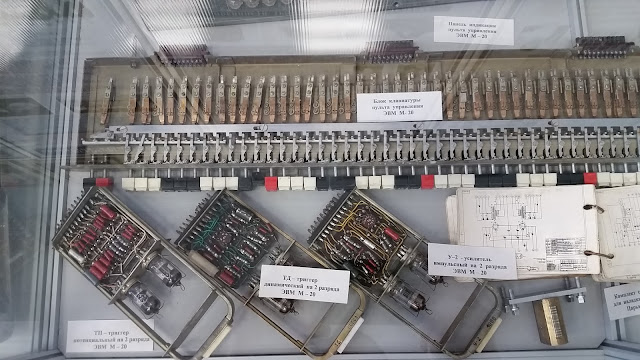 In the end of 1960 the computers were ready, successfully tested and moved to the customer, which was the military agency. The engineers did not know what kind of calculations and tests they were successfully performed. As history showed the second M-20 machine was used to calculate the path for the space rocket and this same computer was used to launch the first human space journey with Gagarin in the 12th of April, 1961!
M-20 is named after the 20 000 operations per second, during the five years there were built 63 sets of the machine.

The next machine "Setun" was developed in Moscow by Nikolay Brusentsov and build in Kazan in 1961. The machine got its name by the river "Setun" near Moscow State University. It had three-state logic, which was quite novel at that time and still is a unique serial implementation in the world. Instead of two-state logic "true-false" and bits "1 and 0" Setun had operations with trinary states "true-false-maybe" and stored trits "1 0 -1" in the memory. Some of the benefits of three-state logic are: the program size and data is 1.6 times smaller than two-bits representation, there is no need to take special bit for the number sign, additional branch for the if-else switch. 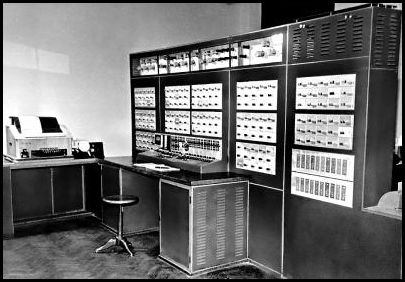 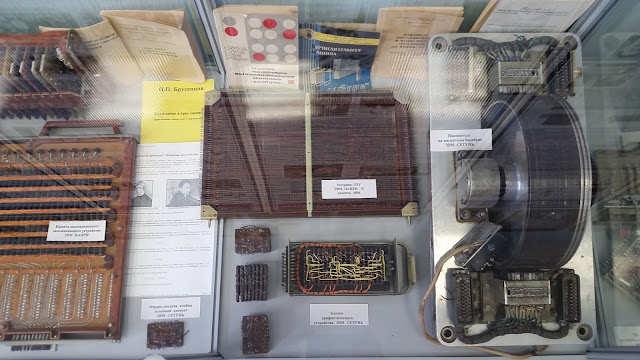 Parts of Setun computer,
at the bottom in the left side is a small core item - ferret-diode cell,
on the right side is a magnet drum for external memory.

Almost every part of products was built by the manufacture and often required novelty and tackling difficult tasks. Overall there were produced 47 sets of these trinary machines during 1961-1965 in the Kazan computer factory.

Another computer was designed in Yerevan by G. Ovsepyan in 1964. He had a big fight for this machine with the heads of Soviet departments and finally made excellent and robust computer. It was produced in the Kazan factory during 1965-1970.  Nairi was very successful product and very popular in the Soviet Union, the factory engineers made improvements and built overall 500 machines closely working with Ovsepyan's team. Ironically, many Yerevan scientists and the Comunnist party heads stole Ovsepyan's achievements and got awards. He had not been mentioned for decades and some of the cheaters still have political power and are afraid to mention his name. 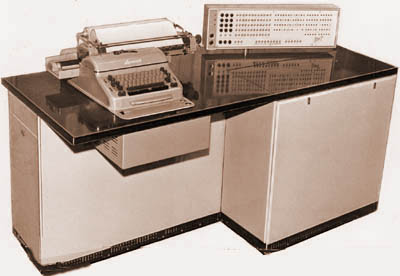 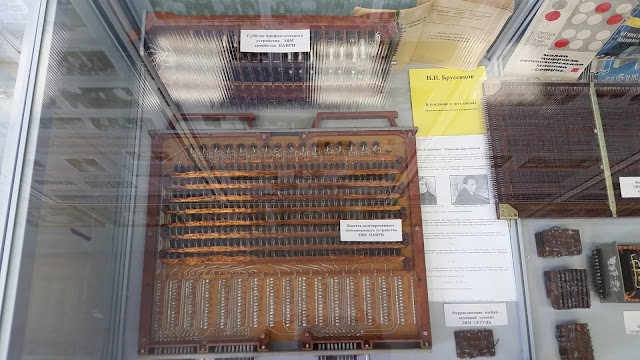 Parts of Nairi computer,
in the middle is permanent data storage,
in the top-right corner is in-line storage

In 1960s IBM made enormous improvement in computer design by spending 5 billion dollars for one project and created IBM 360. The project was twice as expensive as the first nuclear bomb project "Manhattan". The Soviet Union heads wanted to have a copy of this "toy". And, after the contract between USA and USSR, IBM 360 was licensed to the Soviet Union. The government obliged to create very similar machine, so across the country appeared the series of IBM clones ES-1010, ES-1020, ES-1030, ES-10XX computers.
While giving the lecture in museum Badrutdinova remembered Korolev's words, the father of Soviet rocket program, who liked to quote his tutor Bartini: "Can left behind system overtake advanced system? - No, if it tries to catch up moving behind, but what if it takes a short cut?".  The Soviet ministers did not want to see local and new computer versions, they just wanted to have american clones. This was the fatal error in the strategy and the death of true novelty! The engineers struggled and liked to build improved and new competitive versions, but their power was voiceless. The command to produce ES-1030 computers came to the Kazan computer factory. After some years the engineers with V.F. Gusev finally managed to create advanced and more robust version, model ES-1033. The leaders and consumers were impressed and this computer was successfully exported to other countries. In 1970s and 1980s the manufacture produced overall 2600 of ES-1033 machines. 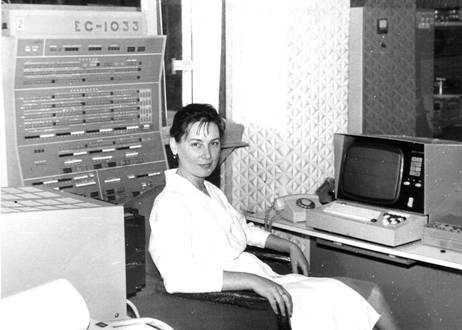 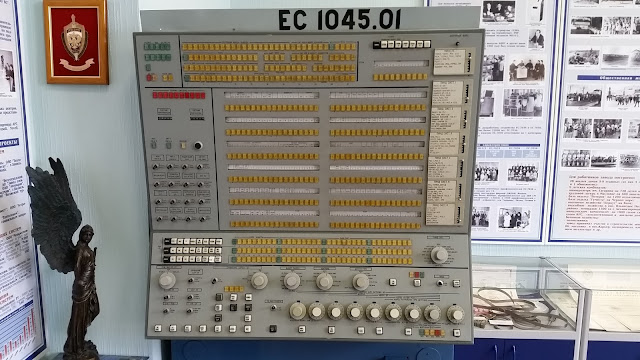 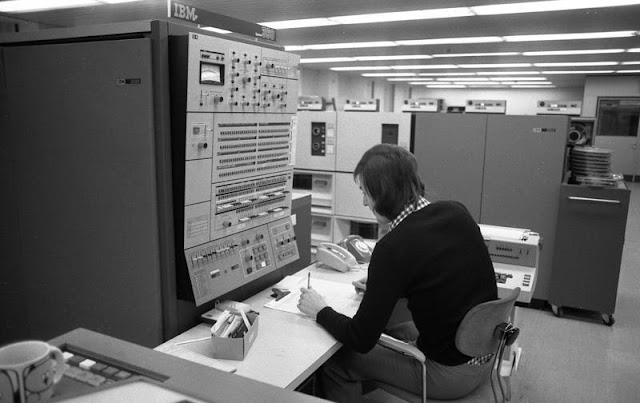 For the purity I do not cover all computers and electronic devices that were produced by the Kazan computer factory. It is clear that engineers did very good job and made very good and competitive computers, often patching and extending existed models. The factory holds lots of top Soviet awards for its production. It seems unbelievable, but the quality of computers was so good, that some of them still are in use in Russian military agency. The products was used in all Soviet space centres and exported to India, Check Republic, Poland, Bulgaria, Hungary, Mongolia. Thus, even now it is quite possible to meet one of these old workers in real life applications.

Later the factory was merged with the famous UK company ICL. Now it is part of Fujitsu companies. 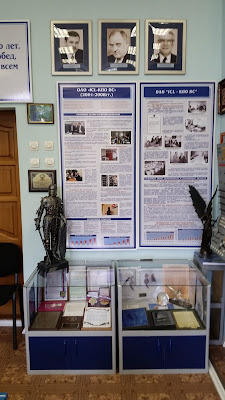 Modern awards from Russian government.
On the left side the knight is the present from Kaspersky Antivirus for its partnership.


P.S. I am very thankful to Margarita Badrutdinova for the personal lecture and the book about Kazan computer history. You can reach this small but valuable museum at Sibirskiy trakt Street, 34, Kazan city, Russia.


Sources (in Russian and English):

M. Badrutdinova and retrotexnika.ru, "Our answer to Steve Jobs and Bill Gates. The development of electronic engineering in USSR" https://www.youtube.com/watch?v=_9cr4dQPoa8